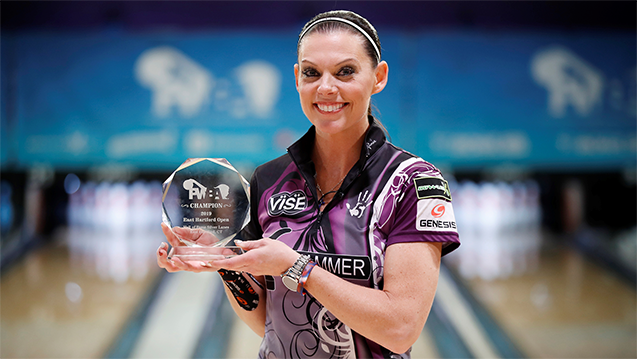 O'Keefe, the top overall seed, delivered in the ninth and 10th frames at Silver Lanes to secure her 11th career PWBA Tour title, defeating Germany's Birgit Pöppler, 225-203. O'Keefe claimed the $10,000 top prize with the win, which was broadcast live on CBS Sports Network.

Neither player relented in the championship match, but back-to-back spares in the eighth and ninth frames from Pöppler gave O'Keefe the opportunity to take the title.

After talking with her husband, Bryan, about her pace to the line just moments before her final frames, she made the adjustment she needed to strike in the ninth and first shot of the 10th frame to give herself the opportunity to secure the win. She knocked over nine pins on her next delivery to seal the victory.

"I've had a tendency throughout my career, when I try to slow down my tempo, I can get really mechanical," said O'Keefe, the 2018 PWBA Player of the Year. "After that lucky break in the eighth, I looked at him and he told me to just walk. So, I really felt like those shots in the ninth and 10th were unbelievable shots. I'm so grateful he was there. He knows my game so well and can deliver that kind of message in the heat of the moment."

O'Keefe now finds herself in a familiar position as she increased her lead in the PWBA Player of the Year race, but she's focusing on a different mindset in 2019 as she looks to continue the momentum from another big win last month as part of Team USA.

O'Keefe paired with Stefanie Johnson of McKinney, Texas, to win the gold medal in doubles competition at the 2019 Pan American Games in Lima, Peru.

"I haven't even looked at the points once this season," said O'Keefe, who's also won the PWBA Twin Cities Open and PWBA Tucson Open. "I can only control what I'm doing. Last year, I got so caught up in what everyone else was doing, and it made me miserable. I needed to change my mindset. I've really wanted to just have fun and soak in every moment this season. It's made everything much more enjoyable, and I'm going to keep doing what I'm doing."

Pöppler put together six consecutive strikes in the middle of her semifinal win to move past 2018 PWBA Rookie of the Year Jordan Richard of Tecumseh, Michigan, 236-207.

Pöppler, the 2017 PBA/PWBA Striking Against Breast Cancer Mixed Doubles champion with Jason Sterner, had to earn her spot in the elite field this week through a pre-tournament qualifier (PTQ) on Thursday at Silver Lanes, since she sat outside the top 24 in points heading into competition this week.

She led the 60-player field Thursday and continued her momentum throughout the main event. Her second-place finish also helped her move into the top 24 in points, meaning she will not have to bowl in the PTQ next week at the Pepsi PWBA Louisville Open.

"I started pretty well in the first match, but I knew the second match was going to be tougher because Shannon had moved left with some surface, so I had to jump left," Pöppler said. "When I really needed good shots, I couldn't make them, so I can't blame anyone else.

"I had to bowl the PTQ, and I don't think the pattern seemed that different when we practiced later that day. I felt pretty confident, and I just tried to enjoy the fact that I made it into the field. I'm glad I won't have to bowl the PTQ next week in Louisville."

Richard advanced to the semifinals by delivering in the 10th frame against Colombia's Maria José Rodriguez, 199-182. Working on a strike in the ninth frame, Richard rolled a strike and toppled seven pins to shut out Rodriguez.

Rodriguez bounced back from an early miscue in her opening match against Latvia's Diana Zavjalova to collect a 212-193 victory. Rodriguez missed a 10 pin in the third frame but rolled strikes on five of her next six shots on the way to the win.

A total of 32 players earned spots in this week's main field. The top 24 players on the 2019 PWBA points list (through the U.S. Women's Open) secured automatic spots in the field, while a PTQ held Thursday at Silver Lanes determined the bowlers filling the rest of the field.

Three players in the elite field - Erin McCarthy of Omaha, Nebraska, and Singapore's Shayna Ng and Cherie Tan - did not compete this week, which allowed 11 bowlers to advance from the PTQ.

BowlTV.com provided livestream coverage of all rounds leading up to the stepladder finals.

An additional event will take place Sunday at Silver Lanes as a PWBA Regional event will be held at the 52-lane center. Competitors will bowl eight games, starting at 9 a.m. Eastern, to determine the top four players for the stepladder finals, which is scheduled to start at approximately 2 p.m. Eastern. Both rounds Sunday will be broadcast live on BowlTV.

The 2019 season will continue next week as the Pepsi PWBA Louisville Open heads to Executive Strike and Spare in Louisville, Kentucky, from Aug. 8-10. The stepladder finals will air live on CBS Sports Network on Aug. 10 at 5 p.m. Eastern.