Hammer's Shannon O'Keefe was named the 2019 PWBA Player of the Year. This marks the second consecutive year she has earned the coveted title.

Watch this space for more news as it becomes available. 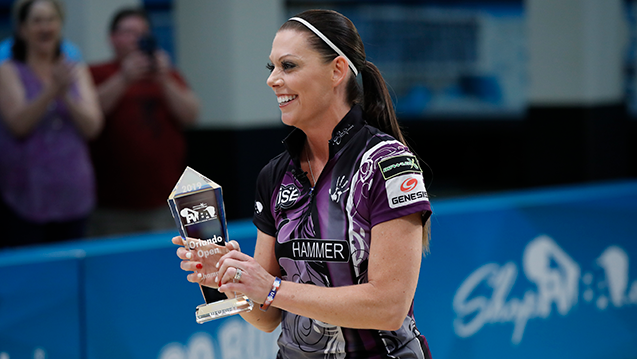 ARLINGTON, Texas - Shannon O'Keefe has earned the Professional Women's Bowling Association Player of the Year award for the second consecutive season, wrapping up the honor with her runner-up finish at the QubicaAMF PWBA Players Championship this past weekend in Raleigh, North Carolina.

O'Keefe, of Shiloh, Illinois, leads the 2019 PWBA Tour season in points, which determines the PWBA Player of the Year. As the points leader, she automatically is seeded into the semifinals of next week's season-ending PWBA Tour Championship and, since she can finish no lower than third, no one can catch the 40-year-old right-hander.

"Winning my second PWBA Player of the Year award is mind boggling and humbling all at the same time," O'Keefe said. "This one most certainly means more because I was able to do it, competing from beginning to end, by sticking to my mental process and season goals."

She put together an impressive run in six championship-round appearances this season, averaging more than 225 and posting a 9-2 record.

O'Keefe will make her seventh championship-round appearance at the PWBA Tour Championship in Richmond, Virginia. She won the event in 2017.

CBS Sports Network will have live coverage of the PWBA Tour Championship finals on Wednesday, Sept. 18, at 8 p.m. Eastern.

Throughout her 2019 campaign, O'Keefe has professed the need for a different outlook in comparison to her 2018 season, despite winning the coveted award for the first time in her career.

Taking home the award consumed her during the second half of 2018, O'Keefe said, and it affected her performance as Danielle McEwan of Stony Point, New York, made a late charge. But, for the second consecutive year, O'Keefe was able to clinch the award at the PWBA Players Championship.

"Last year, I was so obsessed with the player of the year race and points, I completely missed the last three tournaments," O'Keefe said. "I felt like I was just waiting for time to run out and the season to hurry up and end. I worried about what other people were doing, and I got lost in what I was doing and how I ultimately wanted to compete.

"The mental discipline I brought into this season was necessary for me to continue in my path of growth to be the best I can be. This season is so much more vivid. I was able to embrace my struggles and celebrate my successes. I lived in every moment, good and bad. I didn't listen to or let the outside noise distract me from reaching my daily, weekly, season and career goals. I'm proud of how I stayed true to the plan, and I'm not sure if this season would have been as successful without it. I will continue to carry this mindset throughout the rest of my career."

McEwan again was the top contender to take over O'Keefe's spot in 2019 after winning the U.S. Women's Open in June. McEwan officially was eliminated from PWBA Player of the Year contention with her seventh-place finish at the PWBA Players Championship.

Her run this year also included winning a gold medal for Team USA at the Pan American Games in Lima, Peru (in doubles with Stefanie Johnson), along with one silver medal (singles) and two bronze medals (team, all-events) at the World Bowling Women's Championships in Las Vegas.

O'Keefe (2018 and 2019) and United States Bowling Congress Hall of Famer Liz Johnson of Palatine, Illinois (2015-2017), are the only players to win the PWBA Player of the Year award since the tour's relaunch.